Forty Days in Egypt in the Time of Corona

A group of tourists suddenly find themselves caught amidst the tombs and temples of Ancient Egypt, while the world outside is turned upside down by the scourge of a new pandemic.

Alone, stranded in a foreign country, their worlds fall apart. Facing the virus, and a government that doesn’t care, they come together to find the silver linings in a deadly Corona cloud. In the early months of 2020, the world came to learn of a deadly new virus that was spreading its way across the globe. In its initial stages the area of concern was China, but slowly it spread, and as it spread so it picked up speed. As a new strain, details were scanty, and it was difficult to separate the facts from the scaremongering that is the delight of social media. People made travel decisions based on what they knew at the time.

Given the varying times between infection and showing symptoms I cannot really say when I caught it. I can only assume that as the tour leader with the responsibility of tickets and other paperwork, I came into more physical contact with other people. Remember, this was at an early stage and social distancing was not the thing it was to become. So, there are gaps, as some days I did not manage to get out of bed and some days I was in a delirious state, of which I have no recollection.

This is my story of being stranded in Egypt for forty days, in the time of Corona. 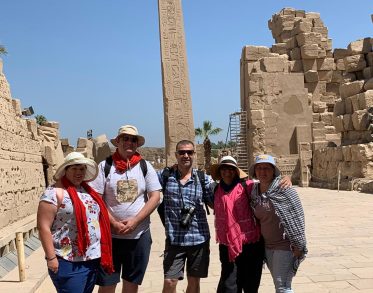 Forty Days in Egypt in the Time of Corona

The true story of our March 2020 tour to Egypt.
Now available on Amazon in paperback or Kindle
Paperback: $22.95
Buy Now

Join Ted Loukes on an amazing 8-day adventure in Egypt. Step back in time and explore the extraordinary tombs & temples of Ancient Egypt, from the Great Pyramid to the Valley of the Kings and so much more, on an Egypt Experience like no other. For more info click on GnT Tours.